An interview with Karl Grandin, the man responsible for the weird and wonderful artwork of Sweden’s Omnipollo.

Long known for their unusual, innovative beers and their idiosyncratic approach to craft brewing, Karl’s artwork is a personal outlet that helps the famous brewers blur the line between beer and art.

How and when did omnipollo get started?
About seven years ago I was introduced to the brewer Henok Fentie by a mutual friend. Our friend is a curator at a gallery and she knew about my art and Henok’s brews and thought the two of us should create something together. The first time I met Henok he had recently returned to Stockholm after a year in Belgium and he told me about this strange new beer that he was working on. We ended up spending the whole day talking about art and music and never really stopped. Somewhere along the way the name Omnipollo emerged.
What were your introductions into the worlds of illustration and brewing?
I grew up next to a mountain outside of Stockholm. As a teenager I started working with the Swedish music magazine Pop and a world of exciting new music and imagery opened up. During that time I started collaborating with a friend who was working with drawings as well. We shared an obsession for far-out images and graphic design and were equally uninterested in advertising, the dominant realm for graphic designers in Sweden in the late 90s. Together we formed the group Vår, a sort of experimental studio set up to find new playful ways of working together. Some years later we bumped into a group of friends running a small vintage denim store and founded the clothing brand Cheap Monday. I was involved with Cheap Monday for about four year before I left and decided to focus on more personal work.
I don’t have a lot of experience with brewing. Henok first introduce me to it and we even made a book about home brewing a few years ago, basically Henok showing me how to brew in his kitchen, but I very rarely attempt to brew anything more advanced than kombucha.

Did you ever expect omnipollo to be as successful as it is?
Omnipollo keeps surprising me every single day.
How important do you think Omnipollo’s unique appearance is to its success?
It is hard for me to tell what role the imagery has played in the success of the brand but I am sure the designs have opened a few eyes and hopefully some minds as well.

Do you think branding and identity is important to the success of a craft brewery?
Like a good book or album cover, an interesting packaging tickles the imagination. It is a gateway and, if successful, adds something to the experience. I hope the Omnipollo images stays in your head and grows into something personal.
Omnipollo regularly collaborates with other breweries. Was this always the plan for omnipollo or do these collaborations happen organically?
Henok conceives the recipes at home and then we travel to different breweries across the globe to create the beer. In that sense all of our brews are and have always been collaborations, in one way or another.

There seems to be a tongue in cheek sense of humour in a lot of omnipollo’s artwork? How much of your personality is reflected in your illustrations.
The images are very much me. 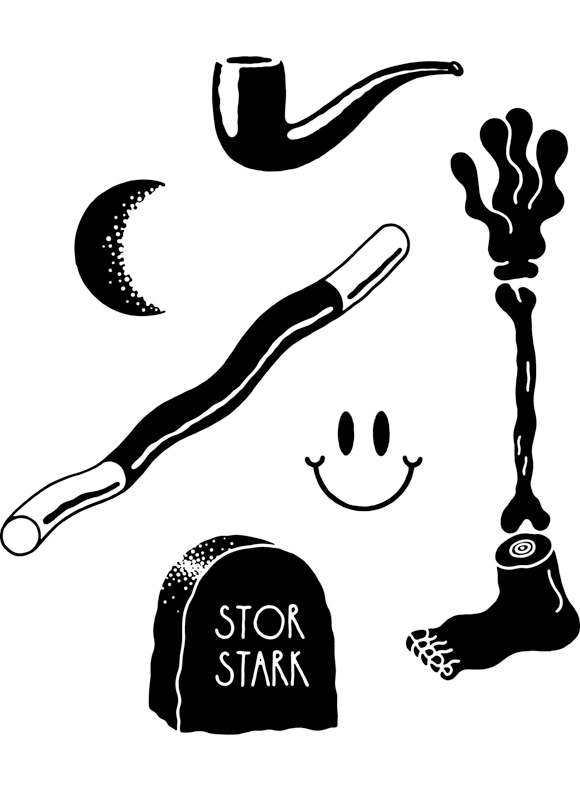 Omnipollos bottles have shown a wide variety of styles and influences. Do you try and keep your work varied on purpose?
I have always been interested in packaging, or design, as a way of artistic expression and that is how I approach the Omnipollo products. Since we brew all over the world, in different breweries, often with completely different conditions and requirements, we use all types of bottles, cans and other containers for our beers, without any unifying format. This is something I enjoy and use as an advantage, letting the artwork speak for itself as much as possible, without disturbing it too much with annoying logos or words.
Some of your work appears to reference unusual influences such as science fiction, psychedelia, fantasy and the occult. Do you make a conscious effort to use designs that might be seen as slightly subversive?
I enjoy mind expanding things and themes – it is what I dream and think about, and that is what I refer to in my work. We live in a world where political and religious symbols are charged and at the same time constantly changeable and that is an influence in my work. 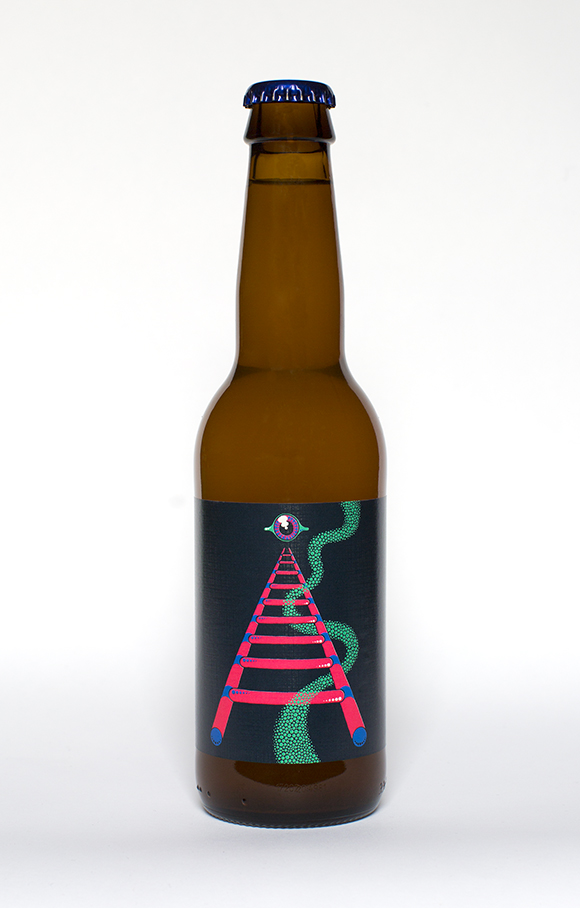 What are the biggest influences for your work with omnipollo?
My personal unconscious, dreams, daydreams, memories, visions.
You recently unveiled an art exhibition at Kuvva gallery Amsterdam centred around your work with omnipollo. Do you consider the work you do for omnipollo branding first and foremost or is it more artist expression?
I am interested in work that is hard to define and I try to ignore the divides between product, design, fine art, etc. A drawing I originally did for a label might appear in an art show, as a wallpaper or in an animation. I try not to make too much of a distinction between different types of work and instead approach every project as an opportunity to try out something new. When I first create an image, it is often personal and without a defined purpose. In the end, if printed on can or bottle, it acts as a form of branding.

One of omnipollos collaborations with Buxton brewery, yellowbelly, was made with an anti-racism message in mind. Was using omnipollos reach to spread a social message always something you had planned and do you think more breweries should do the same?
There will always be a political aspect to your work if you express your thoughts and ideas through art, there is no way around it. I think breweries should express themselves more in general.

Do you have any favourite artists or designers?
I really enjoy the work of visionary artists like Hilma af Klint, Alejandro Jodorowsky and Paul Laffoley.
Do you have any favourite designs you’ve done for Omnipollo?
One of my favourites is the Amun can, with a shy deity hiding in a tiny hole. But hopefully the next one I make will be the best one so far. And then the next one after that. 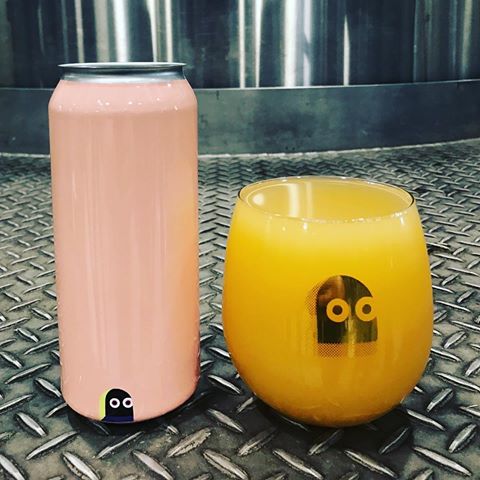 Do you have a favourite Omnipollo beer?
The hazy saison-inspired imperial IPA Fatamorgana is my go to beer and definitely one of my favourites. I am a huge fan of Henok’s brews and he keeps amazing me with his wondrous creations.
Are there any other breweries you’re excited about at the moment?
I like a lot of the beers from Monkish and Tired Hands. Hair of the Dog is always amazing. There is just so much good stuff around. 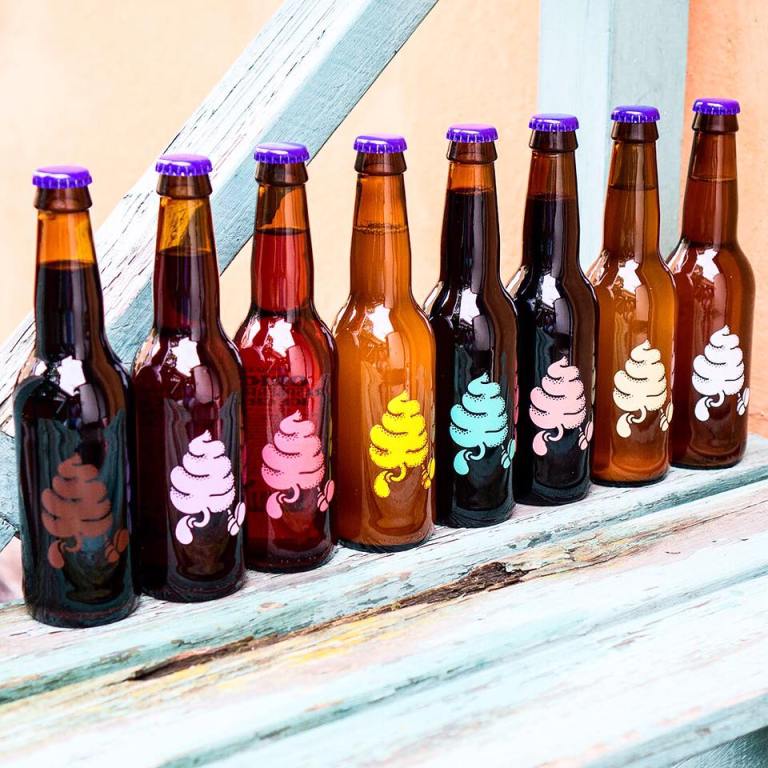 What work do you do outside of Omnipollo?
Next to Omnipollo, I mainly work on personal projects, like exhibitions, murals and experiments.
What are the plans for Omnipollo in the future?
The world of Omnipollo keeps developing and shifting. Through all the people we meet, the collaborations we do and the ideas we dream up, Omnipollo is becoming something bigger than the sum of its parts.