An Incredible city and a fantastic spot for a few world class beers.

Just what you’d expect from a Mikkeller bar. A beautifully designed minimalist spot with a Scandinavian feel. Low hanging lights, candles, simply finished wooden furniture and framed Keith Shore prints on the walls. The bar boasts 22 taps and a long and extensive bottle list for sitting in or taking out.

The list is a mix of mikkeller regulars old and new, as well as collaboration brews and some very hard to find beers from the likes of 3 Floyds, Toppling Goliath and Crooked stave to name a few. For those interested Mikkellers own brand of spirits and wines are also available.

From my experience with other Mikkeller bars, I have to say that this probably has the nicest atmosphere. It’s larger than any of the Copenhagen bars, more spacious and just seems to have a bit more charm. There’s chalk boards inside and out with doodles of familiar Mikkeller artwork, drinks list and food offers. The staff are friendly and knowledgable. It’s dimly lit compared to other bars but coming in from the scorching Barcelona sun it’s nice and easy on the eyes and fits in nicely with the bars laid back feel.

It’s stylised and pristine without ever feeling pretentious. On our multiple visits the bar was always busy but never rammed. The bar is priced similarly to the Copenhagen bars and I will admit that compared to the average Barcelona bar it works out as a decent amount more.

You do get what you pay for though and the taps had some fantastic beers pouring that you will just not find elsewhere. Three Barcelona exclusives, Eixample pils, Eixample wit and Eixample Brown. Some Warpigs brewpub beers I’ve never seen outside of the brew pub itself, To øls fantastic Goliat imperial stout and the 13.1% coffee, honey and vanilla monster Black hole.

The bottle list has any current Mikkeller beer you could be looking for, some harder to find gems like the 3 Floyds/Mikkeller barley wine collaborations, Toppling goliath rover truck and golden nugget (pseudo sue had just run out) but biggest of all by a mile the Barcelona bar was the only place in Europe to pick up the legendary Dark Lord imperial stout by 3 Floyds.

Unfortunately Dark Lord is only for those with very deep pockets who don’t mind splashing out almost 100 euro on a bottle of beer. The three versions available, the 2014, 2015 and aquavit barrel aged ran at €90, €96 and €145 respectively. Out of my price range unfortunately.

It also boasts a great food menu but on our visits we kept it light with nachos, warpigs smoked jerky and veggie fajitas. All as well crafted as the beers.

Sour ale brewed with white wine grapes aged in white wine barrels. Not surprisingly this tasted hugely of white wine. Even the acidic sour quality of the beer reminded me of a very dry or tannic white. It’s a very unique sour beer. Some sours get a hint of those white wine notes but nothing like this. I’ll admit it took me a while to finish but a nice beer for fans of sours that want something a bit out of the ordinary.

Lil’ drunk baby, the session version of Big drunk baby, the Warpigs DIPA I sampled at the brewpub in Copenhagen. I’m not sure how they’ve managed it but even here in Barcelona the beer seems just as fresh as any I tried in the brewpub. It’s a scaled down version of its larger brother and it’s every bit as good without putting you on your arse after two or three. Grapefruit, mango, lemon peel and a big bang of orange. Moderately bitter, carries the beer but nothing crazy. A very drinkable, fruity and fresh IPA.

A sweet oatmeal stout from Toppling goliath. Not overly sweet for a sweet stout and not particularly heavy for an oatmeal stout. A balanced beer. A little bit of chocolatey sweetness, surprisingly smokey and medium bodied. A nice drinker but not as impressive a beer as golden nugget or pseudo sue. 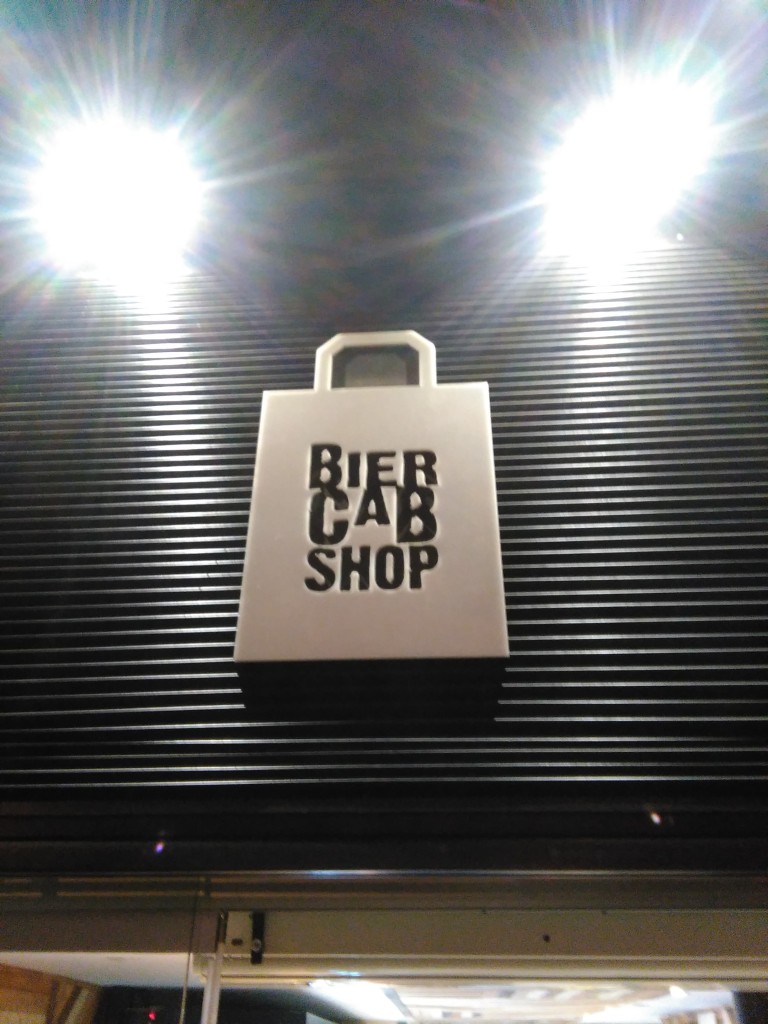 Literally just around the corner from the Mikkeller bar. A bar with an adjoining bottle shop. Due to time constraints because of Primavera festival we only got to sit into the actual bar for a quick drink or two. The tap list is varied, a mix of local Barcelona breweries and some further afield. I drank a mosaic galaxy IPA from London’s The Kernel brewery that was an oily, sticky, piney masterpiece. Those New Zealand hop varieties never disappoint. Other breweries pouring included naparbier, omnipollo, cloud water and boon.

The bar is decently sized with plenty of seating, beer served in iconic rastal teku glasses and impressive wood decor including a strange slated roof that gives the impression the place is caving in.

Next door is the bottle shop, which became the go to spot to pick up beers before the festival. While Mikkeller bar had a great take out list (I just can’t stay away from those TG golden nuggs) it was at bar prices. Bier Cab was comparable to Dublin off licence prices if not even a bit cheaper.

It had four large fridges, a stack of westvleteren crates (including westy 12) a dedicated lambic fridge to the back (ah fair play lads) and a glass case if once again you feel like emptying your savings account. Sam Adams Utopias for €350 a bottle…. nah actually I’m grand.

They also sold t-shirts, glasses, bottle openers and key rings from a wide variety of breweries as well as own brand stuff. Annoyingly they also had a number of empty Zombie Dust and Pliney bottles on a shelf just to get your fucking hopes up.

A really impressive spot, a huge selection that goes above and beyond what I expected to find in Barcelona.

The internet has been singing songs about this beer for awhile now and now I can see why. The smell alone will blow your jocks off but It is also seriously packed with flavour.

A nice mix of sweet juicy fruits and sharp citrus. Think pineapple, mango and grapefruit with a nice resinous oily body. The beer ends with a very long lasting bitterness. It’s 9.2% but you could drink it first thing in the morning with a bowl of cornflakes on a Barcelona terrace.

Tastes as strange as it sounds. It’s a murky green and whacks of green tea. It got more body than you’d expect from a Belgian ale, not as dry either but it does have those unmistakable Belgian yeast phenolics. Not quite peppery but sharp, slightly herbal. It tastes of green tea but much more concentrated than your average cup. It also goes down that vegetable route a little bit. It sounds disgusting but it works well in the beer.

To be honest I wouldn’t buy it again but I would recommend it to someone who hasn’t tried it yet. You only yolo once sure. 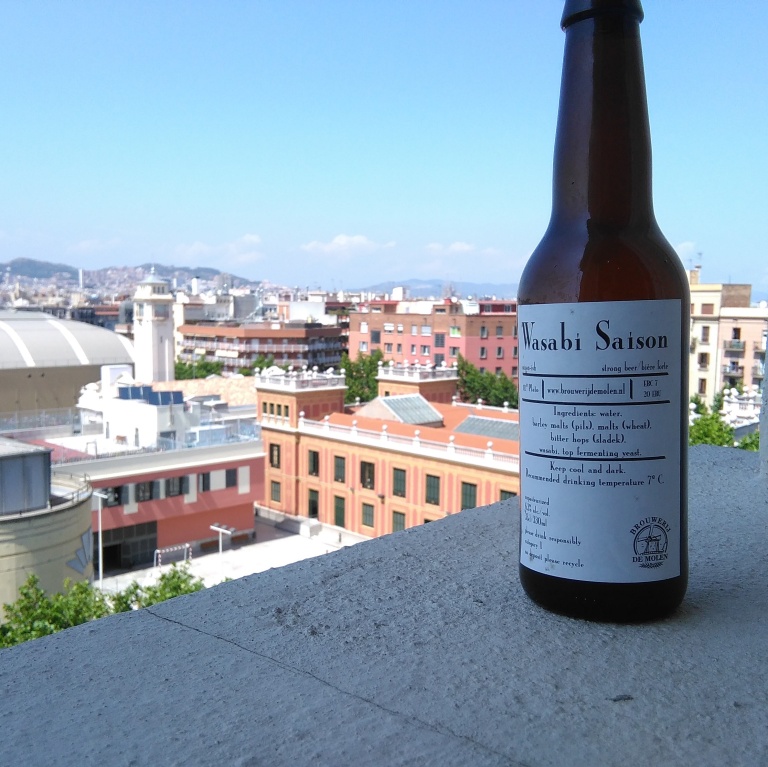 I have only ever heard good things about De Molen and I’ve enjoyed the odd beer I’ve had by them before but Jesus Christ this was undrinkable. Fuck me. I’m going to say this might have been a bad or faulty bottle.

There was absolutely no carbonation. It was cloudy with large white floaters. It tasted of unpleasantly strong Belgian yeast, a very mild heat and flavours that were reminiscent of spinach or broccoli. I’m not sure how this missed the mark so bad but It’s possible I got unlucky. There’s very few beers I wouldn’t finish but this was one of them. 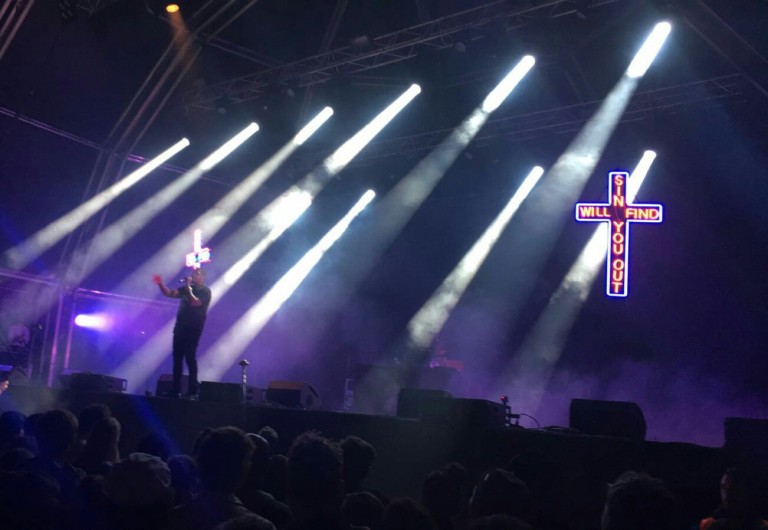 Heineken – Warm from a plastic cup 5%

Festival macro lager. Too steaming to give a shite by this point. 10 minute queue and you’ll probably spill half of it on top of yourself anyway.

Headache, heart palpitations and furry teeth. Still a better idea than the Heineken.